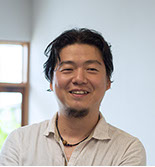 Born in 1956 at the foot of Shirakami-Sanchi in Aomori Prefecture.He began training in carpentry upon graduation form junior high school in 1972.He established Koubokusha in January 2001.The primary objective of Koubokusha is to provide specific inhabitants a house with spatial quality by using authentic materials.The most remarkable ability among his skills is to make images into real by using his own hands. He knows how to bring out the intrinsic performance of hand tools. Using massive timber, he makes rigid timber joints. He also holds a record of 3 microns thin plane shaving.He designs houses and gardens using his keen architectural and spatial sense. He also designs and makes fine solid wood furniture using hand tools.All his abilities make possible to provide totally balanced houses with serene appearance and tranquil atmosphere.He was in charge of the tea-house construction and organized workshop at "The Thinking Hand" exhibition held in Harvard University GSD in Boston in 2014 and "SUKIYA-Japanese Teahouse" exhibition held in Museum of Finnish Architecture in Helsinki in 2015.

Founder and Director of WEIJENBERG, Dutch architect, Camiel Weijenberg is a scholar of the Architecture Association (AA) London with a distinction in technical studies and a foundation in Wood & Carpentry. Camiel's previous roles include working at the renowned Zaha Hadid Architects and with Wilkinson Eyre Architects in London. Camiel is currently conducting a research program 2017 Capstone at the Singapore University of Technology and Design, affiliated with MIT, exploring “No-Carbon High-Rise” and is Visiting Professor at the University teaching Sustainable Design. He has taught Architectural Studies at the National University of Singapore (NUS) and is a regular public speaker throughout Asia. Camiel was recently selected to be part of Hennessy 200year anniversary in Cognac France where he lead talks on design and sustainability accompanied by astronaut Terry Virts, Tammy Ma, Rochelle King VP Netflix, in other words a very select group of 20 participants, brainstorming "the Future of Mastery".

He graduated from Keio University SFC in 2007.He was a member of Shigeru Ban studio from 2004 to 2007 as a bachelor student and a visiting researcher in Keio University SFC.He took part in various workshops and projects with Shigeru Ban studio in Japan, France, Sri Lanka and UK from 2004 to 2007.He was a guest student at Department of Architecture in Helsinki University of Technology, FINLAND from 2007 to 2008.He worked for K2S architects from 2008 to 2016.He received his Master of Science (Architecture) from the Aalto University School of Arts, Design and Architecture in 2015.In 2015 he met Akinori Abo, the founder of Koubokusha, in Finland when he was a translator and an assistant in the exhibition ‘Sukiya Japanese Teahouse’ held at Museum of Finnish Architecture and produced by Takenaka Carpentry Tools Museum.He was shocked by the sense and the philosophy one highly skilled carpenter could have without higher education of architecture.He started to work for Koubokusha since 2016.

Ana Ilic is an architect based in UK. She received a Master of Architecture degree in ‘Architecture and Urban Design’ from the University of Belgrade, Faculty of Architecture in 2008, and in 2013 she obtained a Master of Engineering degree from the Department of Architecture at the University of Tokyo where her research focused on computational design and digital fabrication of component-based structures. Her research work has been exhibited in some the most prominent design galleries in Tokyo. She strengthened her computational design skills further in Tokyo as an architect working for Nikken Sekkei in 2013 on the project for the ‘Olympic Stadion 2020’ designed by Zaha Hadid Architects, and additionally her digital fabrication skills as a design studio lead at the Feng Chia University from 2015. Her work with her students was best presented in the pavilions they designed, fabricated and constructed together that are known by names ‘Wood-Lace’ (2017) and ‘WigWam Pavilion’ (2018).

So Sugita is an Assistant Professor in Computational Design and Digital Fabrication at Hiroshima Institute of Technology and co-founder of Hiroshima Design Lab. He worked on wide range of projects that intertwine architecture, computational design and digital fabrication, like stickMergy(2010), gathering(2010), Game of Space(2011), tsumibako(2014), HDL pavilion(2017).

Born in Yokohama, Japan in 1975, Kiwamu Yanagisawa is an associate professor at Graduate School of Architecture, Kyoto University. Receiving his bachelor's degree in 1999, his master's degree in 2001 and his doctoral degree in 2008 from Kyoto University, he held academic positions in Kobe Design University and Meijo University, and also established his design office, Q-Architecture Laboratory. He mainly studies on the contemporary transformation of traditional urban space in Asian cities, as well as architectural design for houses, renovation of traditional building, community development and so on.

Takeshi has lectured at many architectural schools including Cambridge, Bartlett, Architectural Association, Cardiff University and Chelsea College of Arts. He currently teaches on the MArch at Central Saint Martins and a postgraduate studio at Kingston University. His research focuses on exploring craft, material, traditional and contemporary building techniques and self-build for community engagement.

Master Architect by the Polytechnic University of Madrid (ETSAM), He has lived and worked in several countries across Europe, Asia and Africa. He is currently based in Hong Kong.Jorge co-founded Enzyme APD in 2015 with the goal of pursuing a better implementation of technology and the development of methodologies to improve the design and building process. He is an expert on BIM and Grasshopper, and one of the few certified Archicad experts in Hong Kong.

Graduated with Honours at the Politecnico di Milano in Science of Architecture and AA EmTech graduate, has collaborated with some local companies in Italy before working as Junior Architect at MAKH Architects in Kuwait. He is currently BIM and Parametric Design expert at Enzyme Apd in Hong Kong. Workshops and internships saw him working also in Moscow, Siberia, Italy and Germany. He has been Tutor of operative workshop Landworks Sardinia with Prof. Christian Phongphit from KMUTT Bangkok.

Born in New York in 1987. Graduated with a master's degree from theWaseda University Graduate School Department of Architecture and Architetcure Engineering in2013.Currently working as the Computational Design Team Leader in the Design Department of Takenaka Corporation.Involved in the integrated operation of tools for the initial design stage and wih the international competitions and initial stages of projects requiring visualization.